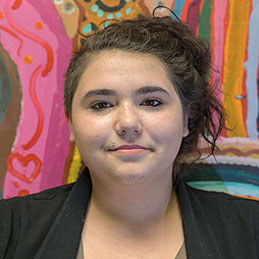 “If not for YBA, I would probably be at home doing nothing with my life.” – Grace Wiley

It has been a busy and inspiring past couple of weeks for Grace Wiley, a current student in LearningWorks’ Youth Building Alternatives Program. A talented artist, Grace attended the opening reception of Regional High School Art Show at Casco Bay Artisans Fine Art Gallery in Portland where she has one of her paintings on exhibit. One week later, Grace and one of her YBA classmates, Brittney, traveled to Riding to the Top Therapeutic Riding Center in Windham to make a donation. “One of the things I have learned at LearningWorks since I began last October, is how important it is to help others in our community.”

Just one year ago, activities like these did not appear to be part of Grace’s future. After dropping out of high school in 2015 Grace knew that she had to take charge and make changes with her life. She had been bullied in school but also accepted some responsibility for her past and wanted to take charge of her future.  She looked up “Alternative Schools” on the internet and LearningWorks popped up. “When I first got to YBA, I couldn’t make eye contact at first because I always felt people were judging me. But the teachers and students work together and I quickly learned that this place is like a family.”

Grace’s goals for the future include completing her High School Equivalency Exam and then enrolling at Southern Maine Community College in the fall to study health science and achieve her goal of becoming a physical therapist. She also wants to come back and visit YBA often and speak to future students. “YBA challenges me to do things that I normally wouldn’t think I could do. I have a different mindset about life now and I want to let other kids know that they can accomplish their goals.”